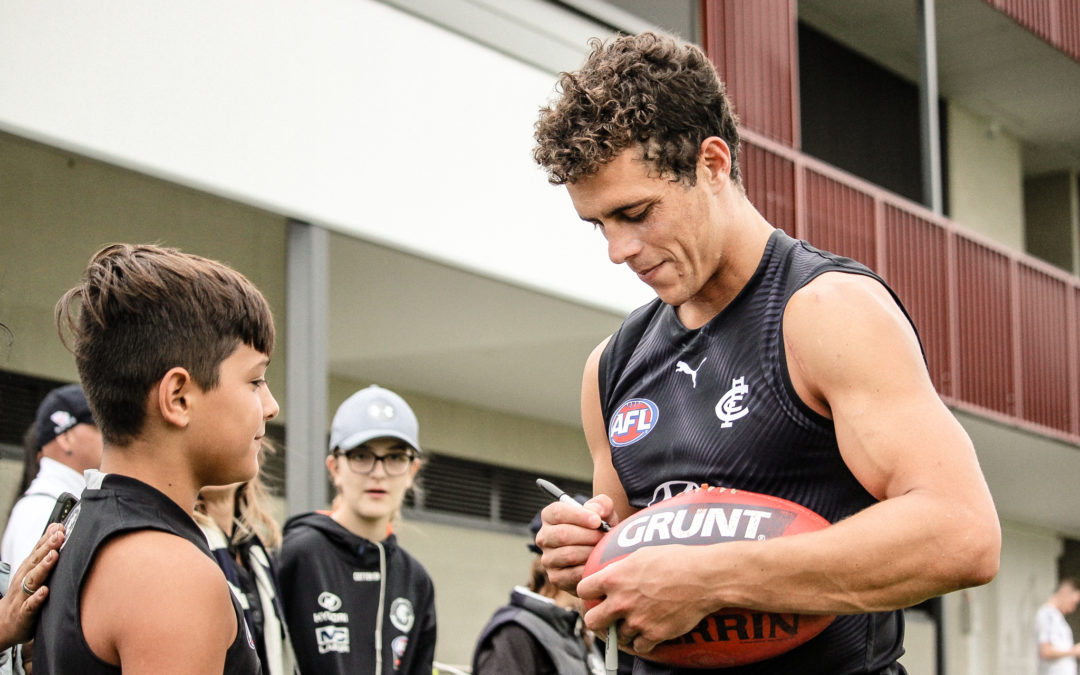 AS AN established player for the Carlton Football Club with 10 seasons under his belt, you would be forgiven for believing that Ed Curnow lives and breathes football.

While this is true to an extent, Ed is also passionate about what his life, and the life of other players, looks like beyond football.

Having completed a Bachelor of Environmental Engineering and a Master of Project Management, Ed is now studying a Master of Finance at the University of Melbourne.

Ed answered questions from students at the Carlton College of Sport about his journey in football, the importance of footballers preparing for life after the end of their football career, his role at the AFLPA and the many jobs that he’s had over his career.

Question from Jack Carroll: When you were coming up through the U18 and then even through the SANFL and VFL, was there anyone you tried to base your game off? When you got to Carlton did you change that?

“I used to tell coaches at Carlton that I focussed on my own game rather than basing it off other players. I knew I would never stack up to them, so instead I admired the things they could do and take what you can, but I just worked on what I had.”

Question from Jack Harrowell: What is your most memorable experience throughout your AFL career?

“Captaining the win against Freemantle in Perth last year. I was pumped, so excited to be the captain. Then I think we were down 35-0 at quarter time so I was pretty worried. Ended up having an awesome game and we won.”

Question from Cat: Is there anything you wish you could have changed back when you were 18, in terms of whether you wish you just dove straight into footy?

“No, I think I was lucky that I always had a passion outside of football for studying. Footy definitely took over and the balance definitely shifted towards footy in my late teens and early twenties, but I’ve managed to study all the way through. Now it’s at a point where I’ve completed a Master of Project Management at RMIT and I’m now doing a Master of Finance at the University of Melbourne.”

“I’ve worked semi part-time for the last few years. I’ve always been a big advocate for getting out there and doing different jobs just to understand what life is going to be like after football.”

Question from Sarah Hosking: What are your plans after footy?

“At the moment I’m working two-days a week with a fund management and property development group. I’ve been working with them for a year and a half now on more of a casual basis, but now with COVID I requested to work on a more permanent basis. They’ve been so supportive of my football career which has been great and they’re very flexible with the work they’ve given me. I can see myself staying there. But I feel like I’m well prepared.”

“Since I started playing, I’ve worked as a groundskeeper, a mortgage broker, in construction management teams, in project management and now in funds management. I’ve also done a placement at PWC in their consulting team.”

“I’m a big supporter of the fact that you don’t have to know what you want to do, but be ok with how well you’ve set yourself up so that when you’re ready to move on you’re not going to rely on some country football team giving you a job. You want to give yourself a few more choices than that.”

Question Ryan Stanley Geer: With your role in the AFLPA – is that something you wanted to be involved in or were you nominated and then explored it? And have you had to deal with a lot of stress with current COVID-19 situation?

“With the AFLPA, my role as a delegate was to relay information from the playing group about how they’re feeling back to the AFLPA, and then any information that is important that they think players need to know we make sure to let the group know. I was in that role for about 5 or 6 years.”

“On the AFLPA board there are currently 6 men’s players and 2 women’s players. I’ve been on the board for about a year now. My initial reason for wanting to be on the board is because I’m passionate about how guys transition from their playing careers, and how they can prepare for that while they’re still playing.”