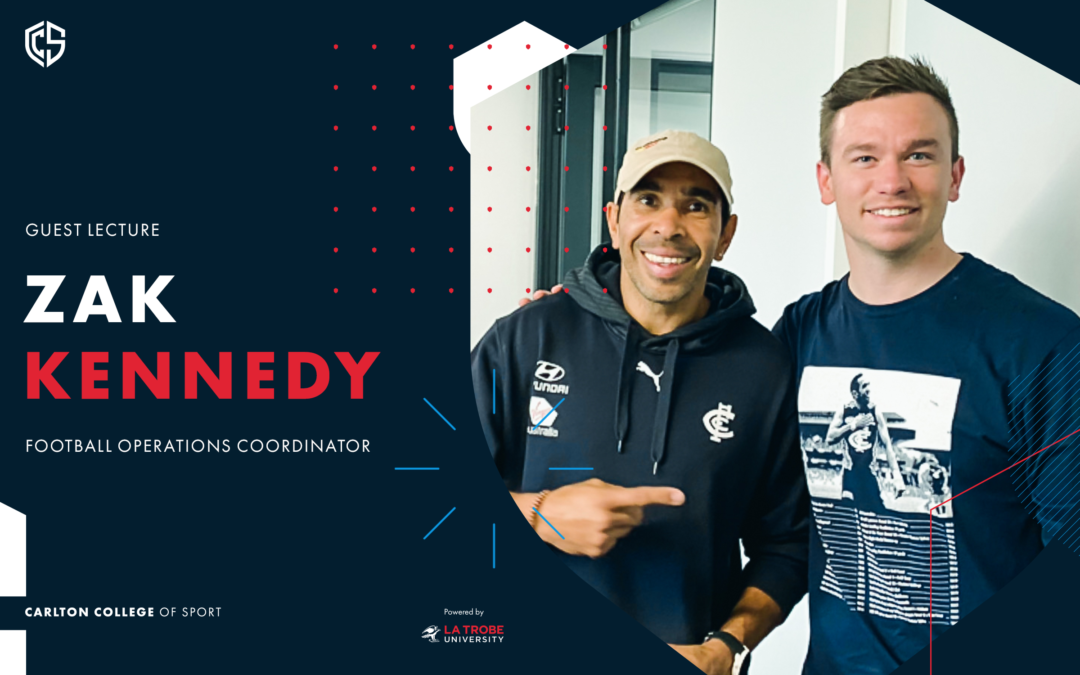 IF YOU HAD TOLD Zak Kennedy one year ago that he would be working at the Carlton Football Club in 2021, he may not have believed you.

Working his way up through the ranks of local and NAB League football clubs early on in his career paid off in a big way for Kennedy, who landed the role of Football Operations Coordinator at the Carlton Football Club in late 2020.

His career path to Carlton includes a vast range of experience, working as a Game Development Officer at AFL Victoria and an AUSKICK Champion, to the Talent Manager at the Eastern Ranges Football Club.

Talking to the Carlton College of Sport students in our latest guest lecture, Kennedy emphasised the importance of volunteering and networking in starting out in a career in sport.

‘You never know who you’re working with and who you might cross paths with in the future. I met my current manager at Carlton, Len, in 2015 through my job at the Eastern Ranges and I made sure that we kept in touch over the years,’ Kennedy said.

A post shared by Carlton College of Sport (@carlton_college)

With one season under his belt in his role at Carlton, Kennedy described what he does on a day-to-day basis as the Football Operations Coordinator at the Club.

‘The great thing about this role is that it is never the same each day. I run the team schedule, so I work closely with Andrew Russell and now Michael Voss to develop the yearly and weekly schedule.

‘I also organise all of the travel for the team, I’m in the coach’s box on game day and managing clinics and player appearances,’ Kennedy said.

Kennedy learnt a lot from his first season at the Club, riding the highs and the lows of state-wide lockdowns and rapidly changing fixtures.

‘It was a tough year, but it has been incredible to see the amount of work that goes into a football season from all of the departments across the Club. I’ve also learnt that a lot of my job is about being flexible and agile so that I can manage anything that’s thrown my way.

‘One of the biggest challenges for me this year was going to Sydney to play the Swans, supposedly for two days, but the trip extended out to 2 weeks due to the lockdown in Melbourne.

‘Obviously it was nothing compared to the hubs that the team had to manage last year with months away from home, but I really wasn’t prepared to be away from home for that long unexpectedly,’ he said.

Along with the challenges were the inevitable highlights.

‘Some of the best things I’ve done this year were being in the coach’s box on game day and working with the Saad Academy.’

As someone who was in a similar position to the students studying at Carlton College just a few years ago, Kennedy had a final piece of advice.

‘Make sure that once you meet people and make those important professional connections, keep reaching out to them. I’m almost certain that I’m in my position at Carlton now because I kept in touch with people in my network.’